The two-house Budget Conference Committee kicked off debate over the 2018-19 state budget this week. At this stage of the process the Assembly and Senate are working to reconcile their respective versions of the budget. Simultaneously, representatives from the Governor’s Office are meeting with senior staff to the Assembly Speaker and Senate Pro Tem to finalize a budget deal that gives all parties a win of some kind.

Comparing the Senate, Assembly, and Governor’s Versions of the State Budget

We have compiled a matrix of major budget items and the different approaches by the Governor, Senate, and Assembly. 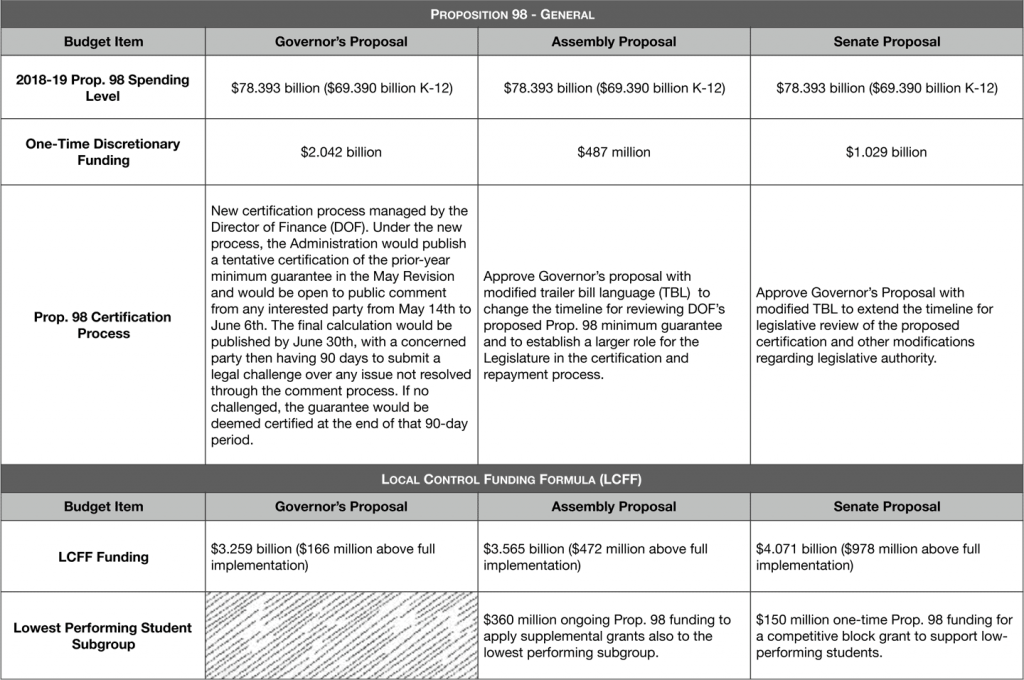 As we discussed in our budget workshops, the election-year dynamics are working in our favor as the all three versions of the state budget propose a higher Prop. 98 minimum guarantee in 2018-19, despite a debate over attendance and other changing factors that drive the guarantee.

The core difference between the two houses’ budgets revolves around the amount and use of ongoing and one-time resources, particularly around how much ought to be shoveled into the LCFF versus providing ongoing funding for issues such as CTE, Early Learning, Special Education, and a long list of other priorities pushed by the Assembly. It is worth noting the following highlights:

Local Control Funding Formula (LCFF) – All parties are proposing to fund the LCFF beyond full implementation in 2018-19 (the Governor by $166 million, the Assembly by $427 million, and the Senate by $978 million).

Career Technical Education – The Governor proposes $212 million (ongoing) to fund the Strong Workforce Program through Community Colleges; while the Assembly proposes $400 million (ongoing) to make permanent the CTEIG program administered through the CDE. The Senate adopted the Governor’s proposal, but modified the language to require half of the funds be administered through Community Colleges and the other half for other high-quality CTE programs, with a role for CDE.

Special Education – The Assembly’s version of the budget provides $200 million (ongoing) to equalize special education funding rates. The Governor and Senate do not propose additional funding for Special Education.

County Offices of Education (COEs) and Statewide System of Support – Both houses of the Legislature adopted the Governor’s proposal to provide $57.8 million (ongoing) for COEs to assist in the provision of differentiated assistance to school districts identified under the new Dashboard. They also all agree to provide $4 million to fund 6 to 10 COE regional lead agencies to assist other COEs with this work.

Members of the two-house Conference Committee include:

We expect the Governor, Speaker and Pro Tem to finalize an agreement sometime after next week’s election. It’s likely the Conference Committee will vote on a final budget package late next week or early the following week and send it to the floors of each house for a vote, where it will almost certainly pass and be sent to the Governor in advance of the June 15 deadline.

Analysis of Governor's May Revision 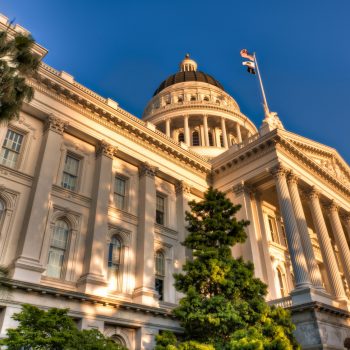 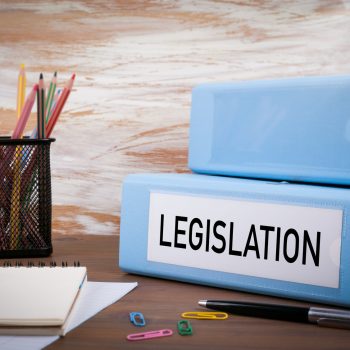